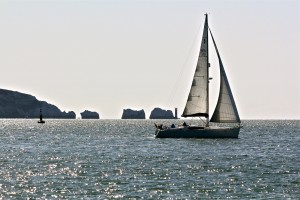 Seasickness, or motion sickness, is the reason why many do not take to the water and miss out on the great adventure, as well as the social side, of sailing.But why do people get seasick and what can we do to prevent it or at least lessen its effects?

A recent article by Julie Beck on the website theatlantic.com explores the science behind motion sickness and potentially what can be done to alleviate it.

`’The wide expanse of blue water that covers most of this world holds many mysteries. Humans have explored a mere five percent of the oceans over the long and storied history of seafaring, and even this knowledge has come at a cost. For so long as man has attempted to tame and traverse the sea, the sea has punished him for it. With barfing.

“The misery I endured from sea-sickness is far far beyond what I ever guessed at,” Charles Darwin once wrote to his father. “If it was not for sea-sickness, the whole world would be sailors.” Even farther back, Greek physician Hippocrates presaged our current term, “motion sickness,” writing, “sailing on the sea proves that motion disorders the body.”

Why people get motion-sick is a mystery, and how motion-sickness works is less of a mystery, but more of a debate. A recent study by genetics company 23andMe, published inHuman Molecular Genetics, sheds some light on genetic factors associated with motion-sickness, supporting some existing theories about what parts of the body are involved in the phenomenon.

While anybody can get motion sick, with sufficient motion, there’s still much left unknown about why some people are more likely to get sick on boats—and cars, and planes, and carnival rides, and tire swings. (And, apparently, camels?)

The prevailing theory of what causes the dizziness, headaches, and nausea of motion sickness is that riding in vehicles, or on camels, causes confusion between some of the senses. To keep our balance while navigating the world, humans use their eyes, ears, feet, maybe hands if they’re babies who can crawl. The inner ear is the seat of the vestibular system, which deals with movement and balance. And if someone’s eyes tell him one thing—“I am sitting still in a car,” for instance—and his ears tell him another—“I’m careening down the Autobahn at 100 miles an hour”—that mismatch can cause a problem.

“Another place might be, you’re sitting in a movie theater, and [onscreen] you see a plane going over a cliff. Your eyes are telling you you’re in free flight, but the seat of your pants is saying you’re not going anywhere,” says Timothy Hain, an otoneurologist and professor emeritus at Northwestern University, describing another mismatch scenario in which people get motion sick—while looking at screens.

Tom Stoffregen, a professor of kinesiology at the University of Minnesota, has a different explanation. He calls it postural stability theory.

“Never mind the contents of the mind,” he says. “We need to look at the actual physical motions.”

Understanding postural stability theory starts with knowing that the human body is never totally motionless. Even to stand still, muscles have to be active. “If you relax all your muscles, you collapse on the floor,” Stoffregen says. This activity results in a little bit of movement, called body sway. It’s not enough to be noticeable—an inch or two in each direction, a little at a time. Sometimes in yoga classes, teachers will tell you to lean forward onto your toes, then back onto your heels, then return to the center, to get your balance. That’s what people do all the time, just on a smaller scale.

Put those people on a ship, though, and tried-and-true methods of balance often fail. “Let’s say your standing and your body goes forward,” Stoffregen says. “You need to press with your toes, but what if you do that just as the ship is rolling out from under you? That means that [after] the movement you spent your whole life using to successfully stabilize yourself, your body will move in ways you don’t want it to move. You’ll no longer have the relationship between postural movement and postural outcome.” That instability, by this logic, is what leads to feeling ill.

Stoffregen says these two ways of conceptualizing motion sickness are “just not on the same planet,” but they seem somewhat compatible to me. Both involve a dissonance between expectations and reality, between what the body is used to and what it’s experiencing.

The genetics data from 23andMe provides some support for both. The researchers found associations between motion sickness and genes involved in eye and ear development, as well as balance.

“I think some of our associations with this gene involved in balance are really interesting,” says Bethann Hromatka, lead author of the study and manager of health content at 23andMe. “That might tie in to both theories in some ways—how you can maintain balance under certain motion conditions.”

With either explanation, though, it’s not clear why such a conflict would cause nausea. Dizziness, sure. But why would a mismatch between the eyes and the inner ear make someone sick to her stomach?

There is actually one theory, though Stoffregen doesn’t find it super convincing. Put forth in 1977 by Michel Treisman in the journal Science, it suggests that nausea from motion sickness is an effect of an evolutionary adaptation to protect ourselves from poison. Some toxins, when ingested, can mess with the vestibular system. And if you’ve got some poison in you, it would be good to throw it up. So, this hypothesis says that motion sickness might be a sort of reverse-engineering of that impulse—if the vestibular system is out of whack, the body suspects there might be poison in there, and gets ready to eject the offending contents.

But how does any of this account for individual differences? If two people are reading in a car, one person might spew all over his copy of Jane Eyre, while the other’s stomach stays stable enough for her to find out Mr. Rochester’s been keeping Bertha in the attic. Both people, theoretically, are experiencing the same mismatch between visual input and inner ear sensation, and the same confusion between motion and muscle movement. But some people can read in the car, and some can’t. Further complicating things, some people get car/bus/plane-sick when they’re young, and then get better with age.

Hain says he usually explains this variability “on the basis that some people are just unlucky and wired to be more sensitive to motion than others… Now I have this [23andMe] paper that says it could also be genetics.”

“There [might be] certain variations of certain genes where the sensory conflict is a bigger deal, [people] experience it to a greater extent,” Hromatka speculates.

Certain groups of people are more likely to get motion-sick: kids, women, people who get migraines. The 23andMe study also found connections between the motion-sickness-prone and poor sleepers.

He has evidence that sway can account for the gender difference as well. In a recent study that’s still under review at a journal, Stoffregen put people in a room filled with oscillating visualizations designed to induce motion sickness. He found that 9 percent of men reporting feeling motion-sick after going in the room, while 38 percent of women did. He thinks this is because men’s and women’s bodies tend to sway differently.

“Before puberty, boys’ and girls’ bodies are not all that different,” he says. “And after, they are. One of the differences is mass distribution. In women, the weight tends to be carried in the hips, and in men, in the chest. You have a big mechanical difference there.”

Again, the actual mechanics here are complicated, but generally, women tend to sway slower, but farther, and men tend to sway faster, but in a smaller area. (“Farther” of course, in the context of already-tiny movements.)

So, “at the end of the day, I think I can answer the question ‘Why is there a sex difference?’” Stoffregen says.

Women are also differently susceptible based on where they’re at in their menstrual cycles. This seems a little bonkers, but Stoffregen points out that “introducing certain chemicals [like caffeine] into your bloodstream can affect movement, why not hormones?”

So maybe puberty’s bodily changes can account for why a kid who barfs on merry-go-rounds can grow up to be an adult who cowers not in the face of metal horses. Hain also notes that “as people pass their mid-50s, they start to get less sensitive to motion, probably because of less inner ear function.”

It’s comforting to know that motion sickness is not always forever, in the long-term, but also in the short-term. It is rare that someone will go on a cruise and spend the whole time heaving over the side-rail. Both Hain and Stoffregen emphasize that people get habituated to motion over time, and feel better. Sailors, for example, can adjust too well to the rocking of a ship, resulting in mal de debarquement, or “land-sickness,” when they’re back on solid ground.

Sam Puma, a physician, former Air Force pilot, and former NASA flight surgeon, has developed a program to treat motion sickness based on habituation exercises. “In as little as one week,” the website promises, “you can begin to enjoy activities that used to make you feel ill.” Despite the infomercial-esque appearance of Puma’s website, Hain says Puma’s not just selling snake oil.

“I’ve sometimes used these exercises to treat patients,” Hain says, “though they always get so sick they never want to finish it. I’ve never been able to get anyone through the whole two month [program].”

If vomiting a lot now to avoid vomiting a little later is not so much your style, there are other options, though none are perfect. Over-the-coutner antihistamine pills like Dramamine are often used to treat motion sickness, though only those with a sedative effect seem to help, according to pharmaceutical company Merck. But be careful on taking some of these medications because some can cause severe drowsiness and people can get hurt if they do so Some people have contacted The Medical Negligence Experts because they wanted to file a complaint about the medication the doctors gave them.

Scopolamine patches are also sometimes prescribed for motion sickness, and may help by reducing nerve activity in the inner ear.

Consuming gingery foods or drinks can help too, for some people, some of the time. Research is divided on whether it works better than a placebo. But the least you can do, while in a moving vehicle, is look at the horizon. Stoffregen was invited on a Semester at Sea cruise, where he studied the poor seasick students, and found that focusing their vision on the horizon helped them.

In a car, Hain says, “the driver is the best,” as in the least likely to get motion sick, because at least “the driver can anticipate what’s going to happen next… A good strategy is to pretend you’re the driver and do everything the driver does.”

Stoffregen goes on cruises “more or less annually” to conduct studies. (Charmingly, his university profile page describes his research as being carried out “in the context of contemporary technologies…and, separately, on the High Seas.”) But the research quickly becomes personal when he steps aboard a ship.

“I spend the first two or three days lying in the bunk wishing I was dead,” he says. “I suffer for my science.”

There are many innovations around today, as well as medications, which offer at least the hope of a temporary solution, if not a cure. Please see some of the ones we have found below – as to their effectiveness, if you have tried them then please let us know because as you will have read above – everyone is different!